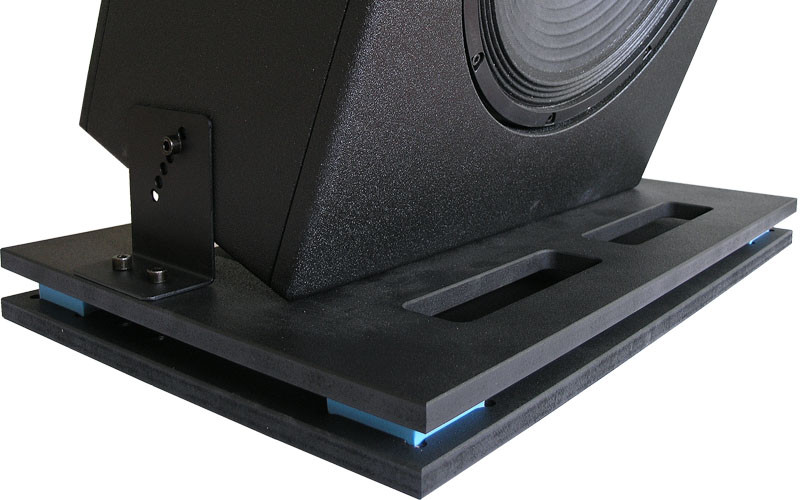 Additionally to the sound insulation pads SP-FPAD34 for front systems SP-F3 and SP-F4 we now provide a complete sound insulation and tilt solution SP-FTK34. Whenever the speaker has to be tilted as well as decoupled from the screen frame/building structure the SP-FTK34 is chosen. The SP-FTK34 is delivered complete with matching foam pads. The available tilt kit SP-FN34 can be ordered as an option. Installation is quick and simple by means of proper screws and threads. 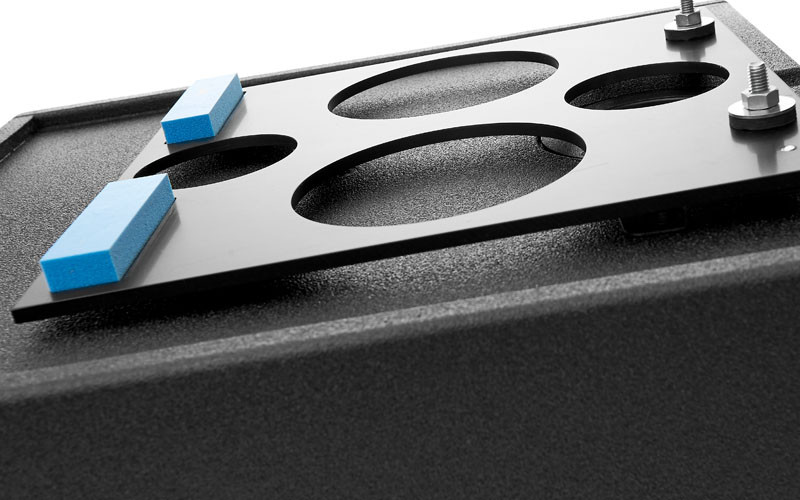 Having completed the prototype phase of the surround sound insulation kit for SP-SR1, SP-SRI2, SP-SRI3 and SP-SR1 we are happy to present the finished product SP-SSIK. Already we have many rooms equipped with the SP-SSIK and successfully minimise the impact sound on adjacent screens and even flats above the cinema.
The SP-SSIK simply goes between the speaker and the wall providing a mechanical decoupling for low mid frequencies. It visually almost disappears behind the loudspeaker so the aesthetical aspect of our installations stay intact. The SP-SSIK attenuates impact sound by as much as 20dB for frequencies in the concerned spectrum. 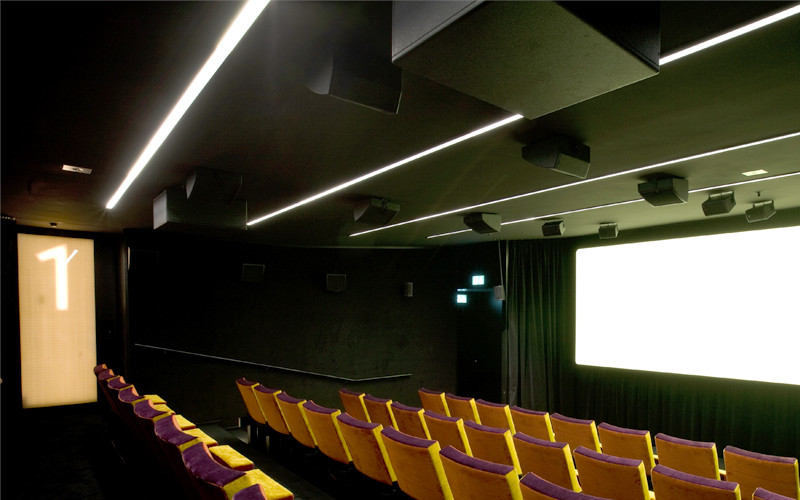 The complete miniplex cinema/bar Houdini with 5 screens has been equipped with Soundparc® loudspeakers. Dolby ATMOS® was chosen for screen 1 with 50 seats. The small auditorium was challenging especially concerning speaker size. An excellent sound was achieved by choosing the right Soundparc® models and thanks to the outstanding room acoustics.
Screen 2-5 got a proper Dolby 7.1 installation. Front systems are SP-F4 with SP-LF3 subwoofers exclusively. Surrounds consist of SP-SR2 as well as some very custom versions thereof for screen 1. 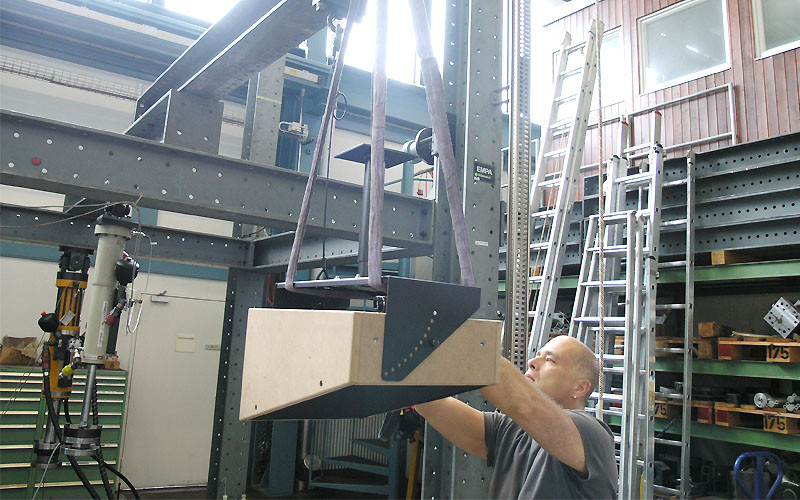 The SP-SRI1, SP-SRI2 and SP-LF3 speakers have passed the EMPA (Swiss Federal Laboratories for Materials Testing and Research) safety tests with flying colours.

Our Immersive Surround speaker and the LF3 sub-bass can therefore be safely mounted above an audience using the corresponding safety kit. To protect your audience, we always recommend a secondary secure attachment with our safety kit. 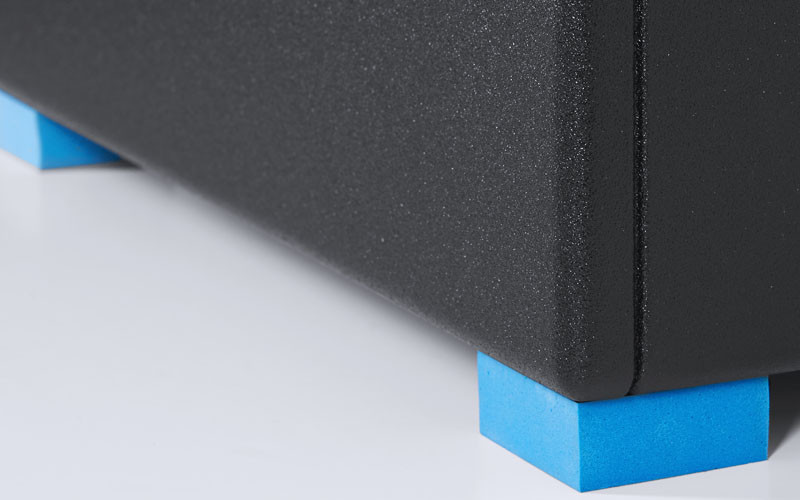 Footfall sound insulation pads are now available for the SP-F3 and SP-F4 front speakers and the SP-LF1 and SP-LF3 basses. The pads are matched exactly to the particular speaker type in terms of their low frequency cut-off and weight.

For the SP-SRI1 surround sound speaker, a complete kit for footfall sound insulation is currently being developed. 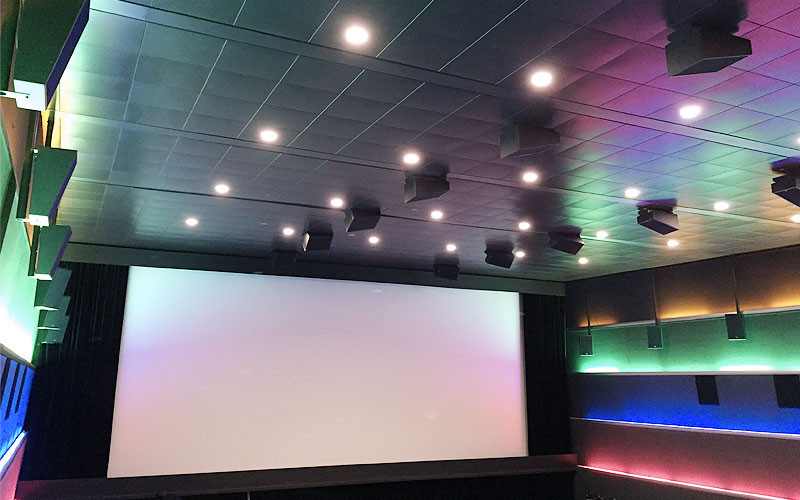 On 25 February 2015, the ATMOS© Event took place at Cinewil 2, where the new sound system was demonstrated to more than 200 invited guests. Following some short speeches and a trailer show, the film “Gravity” was shown in Dolby ATMOS. After the film, the enthusiastic audience also enjoyed the lavish dessert buffet and had a good time until late in the evening.

At the front, we installed an SP-F3 system with two SP-LF1s for LFE. The surround speakers were fitted with SP-SRI1 and for the rear sub, two SP-LF3s were used. The speakers above the audience were protected by the safety kit. The projection room has two racks fitted with amplifiers from the SP-A series. The system is impressive in that it provides sufficient power and a clear sound.